Air pollution in confined spaces has always been a serious public health problem, with significant social and economic implications and, in the current critical situation, the issue of indoor air sanitising plays a very important role. Among the solutions currently available on the market, NTP (Non-Thermal Plasma) technology is considered one of the most effective and safe due to its ability to oxidise and break down pollutants. It is an advanced form of air ionisation, capable of greatly reducing microbiological and chemical agents.

Non-Thermal Plasma, which is also called Cold Plasma, is a physical phenomenon generated at room temperature. It is an ionised gas; that is, it is made up of various electrically charged particles: electrons, ions, atoms, and molecules of organic and chemical origin that collide with each other to produce oxidising species.

Through the collision of high-energy electrons with oxygen, water vapour, and nitrogen it generates various
active species (ions or neutral and radical species) which are transported by the airflow to the pollutants. It is, therefore, an active air sanitising system, which hunts down pollutants and breaks them down without creating any residual substances.

APPLICATION ON FAN COILS, BOTH WITH CABINET AND BUILT-IN:

The JONIX INSIDE device, a new product installed on the ESTRO, FLAT, and FLAT S fan coils, prevents the formation of chemical and biological contaminants (mould, bacteria, and legionella) on the internal surfaces and in the flowing air.

Sanitising takes place continuously, thus preventing dust deposits from becoming the ideal medium for the development of mould and bacteria.

The position of the JONIX INSIDE device inside the fan coil was established after tests and experiments carried out by ARCHA laboratories, with operating cycles of the device aimed at increased sanitising of the indoor unit, in particular of the heat exchanger, condensate drip tray, centrifugal fan, and internal surfaces.

ADJUSTMENT OF FAN COILS WITH JONIX INSIDE

The EVO and MYCOMFORT LARGE controllers manage the combined operation of fan coil unit and devices to
maximise the sanitising effect of the fan coil unit in the main components such as coil, condensate drip tray, and air filter.

Jonix Inside can also be combined with MYCOMFORT BASE, MYCOMFORT MEDIUM, TED, and LED503 control panels. For more information on compatibility, please refer to the technical documentation.

Galletti’s DUCTIMAX, PWN, and UTN series ductable units use JONIX DUCT NTP technology to sanitise the flowing air, to carry out the microbial decontamination of the internal surfaces of the units, filters, and condensing coils, and to prevent the development of legionella in the condensate drip tray. The devices are sized according to their intended use, the air flow rate, and the category of pollutants to be treated.

They are installed in special plenums located on the air intake or outlet and managed by the EVO controller to maximise their effects on the unit, on the ducts, and on the flowing air. Its electronics communicate the operating status to the EVOBOARD circuit board, indicating any malfunctions or scheduled maintenance needs. 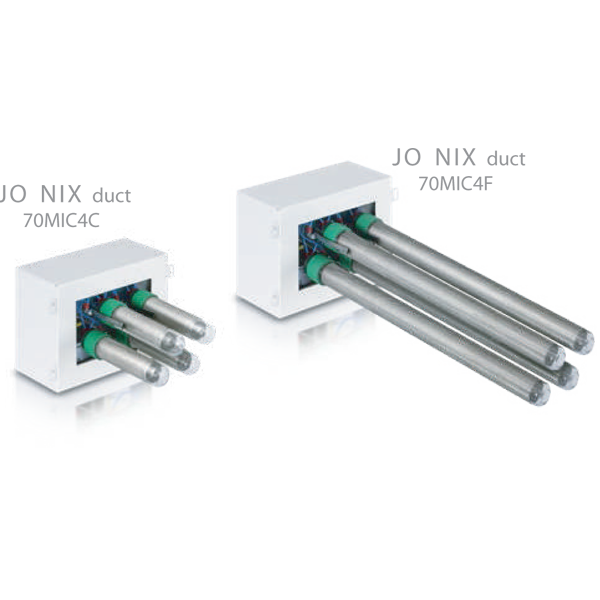 We have several customized packages for your property. Fill out the form with the required details and we will contact you.

Files available for this accessory

This file is restricted to registered users.

Register yourself to discover the advantages of Galletti Download Center!